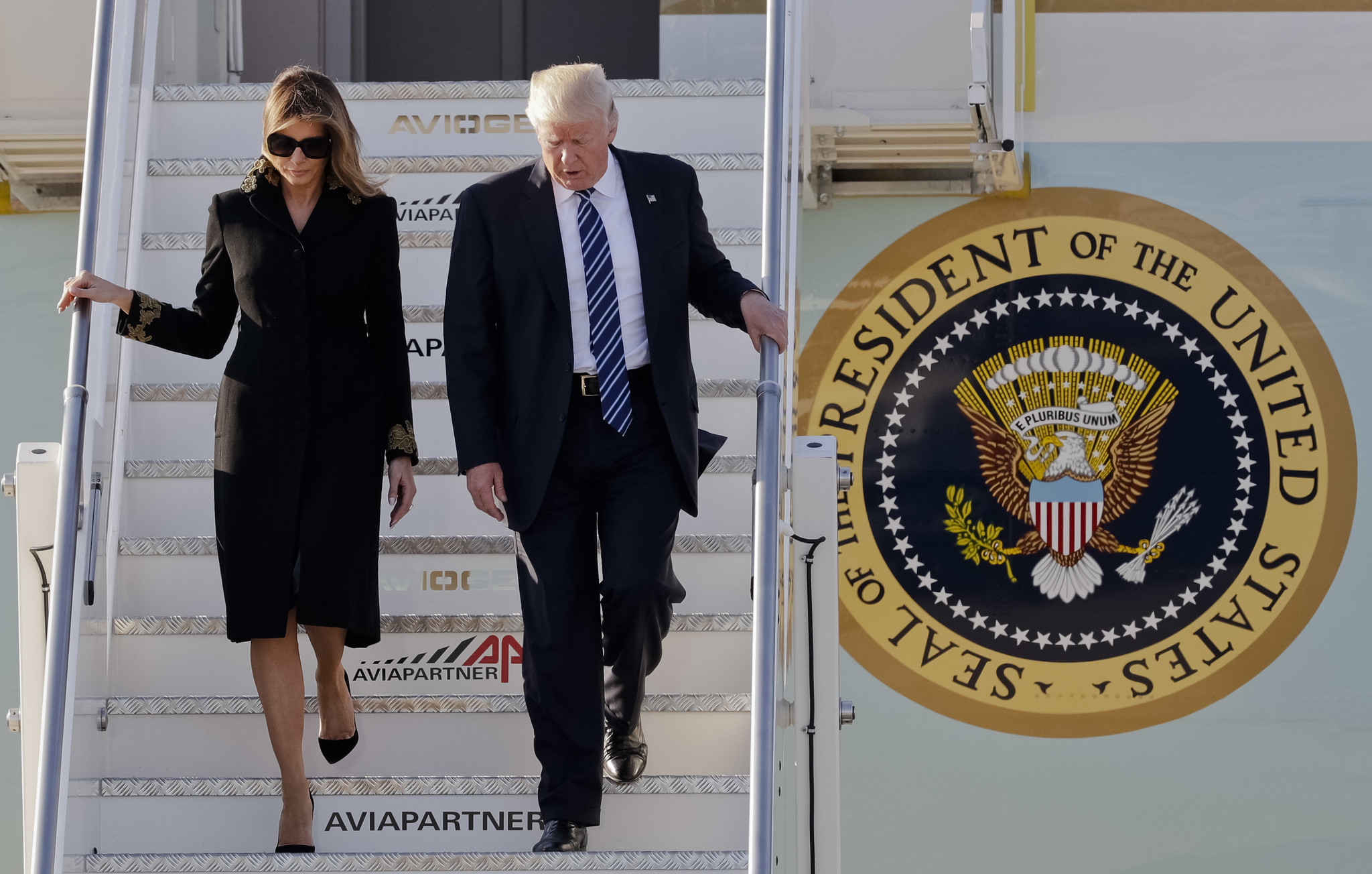 From a friendly Mideast, Trump arrives in a skeptical Europe

From the hushed halls of government to cobblestoned streets and plazas across the Continent, Europeans are greeting Donald Trump’s first visit with considerable skepticism, no small degree of apprehension — and even overt hostility.

The president’s inaugural overseas trip, which began Friday in Saudi Arabia, has so far been dominated by friendly encounters with Mideast leaders, who feted and praised Trump as a canny deal-maker and wise statesman. At a sideline meeting in Riyadh, the Saudi capital, the U.S. leader voiced enthusiastic agreement when Egypt’s president called him “a unique personality … capable of doing the impossible.”

But in Europe, the reception is likely to be quite different.

Protesters were set to march in Brussels, encouraged by organizers to wear pink cat-ear hats. A respected German newsweekly said America under Trump was a “laughingstock,” and called for his removal from office. A French author mused that “we just don’t take him seriously.” And in Rome, where Trump landed Tuesday, some saw echoes of Italy’s own flamboyant ex-prime minister, Silvio Berlusconi.

For whoever occupies the White House, policy differences with Europe — sometimes vehement ones — are nothing new. But Trump’s first visit as president prompted a wave of trepidation not only over issues ranging from climate change to women’s roles in society, but also his impulsive mode of governance and mercurial temperament.

Trump has held face-to-face talks already with several European leaders in Washington, including German Chancellor Angela Merkel, British Prime Minister Theresa May and Italian Prime Minister Paolo Gentiloni. Even so, there was palpable anxiety in advance of his scheduled arrival on Wednesday in Brussels, the Belgian capital and seat of institutions like the European Union and NATO.

“In Brussels, people seem to be walking on eggshells, hoping nothing controversial will happen during the visit,” said Marietje Schaake, a Dutch member of the European Parliament. “This is not how the first visit of the president of Europe’s most important partner should feel.”

Trump has fans and political allies on this side of the Atlantic, of course. Europeans whose views tend to echo those of the president’s backers at home — those who mistrust the political establishment, or feel left behind by globalization, or hold hard-line views on immigration, for example — welcome this U.S. president as a breath of fresh air.

“I like him!” declared Marco Bouquet, a 56-year-old manager at a Rome tobacconist. “He makes decisions and doesn’t waste time.”

The scandals that Trump left behind in Washington scarcely intruded during five days in the Saudi capital of Riyadh, Jerusalem and the West Bank town of Bethlehem. Even in Israel, where intelligence professionals were furious over reports of Trump’s casual passing of classified information to visiting Foreign Minister Sergei Lavrov, the only one who brought up the matter publicly was Trump himself — telling his hosts that he hadn’t mentioned Israel.

In European capitals, though, the fast-moving developments on investigations into the Trump campaign’s possible collusion with Russia during last year’s election have been prime topics for discussion, with many wondering if his presidency can weather the storm.

“The man is his own worst enemy,” German public-television correspondent Ulf Roeller said in a commentary last week from the U.S. capital. “Many in Washington are asking how long this can go on.”

On his European swing, Trump will meet leaders with whom he is a study in contrasts, such as France’s newly elected President Emmanuel Macron, a 39-year-old who is known for his intellectual bent. The two are scheduled to lunch together on Thursday, when Trump will hold a day of talks with officials from NATO and the European Union, both of which he has disparaged in the past.

Even the devastating news out of Manchester, England, where a bombing at a pop concert on Monday night left 22 people dead, illustrated European leaders’ stark stylistic differences with Trump. While most of them offered up solemn condolences and expressions of solidarity to the British government and the victims, the U.S. president employed unusually informal language to deride those who stage terrorist attacks as “losers.”

Trump’s commerce secretary, Wilbur Ross, spoke approvingly in a CNBC interview of the lack of visible protests in Saudi Arabia — failing to note that any anti-Trump demonstrators would have faced harsh punishment, even if they could have gotten anywhere near the president.

But in Brussels, more than 70 organizations were planning to march Wednesday under the slogan “Trump Not Welcome” — hoping, organizers said, to send a message to Belgium’s homegrown right-wing politicians as well.

“Donald Trump has this extraordinary ability to unite a very large number of opponents against him,” Leila Lahssaini, a spokeswoman for the protest, told the Belgian broadcaster RTBF. Taking a page from women’s marches in Washington and elsewhere on the day after Trump was inaugurated, organizers encouraged marchers to wear pink knit hats with cat ears to evoke his famous boast about grabbing women by their genitals.

In Rome, Trump’s arrival triggered operatic complaints about a worsening of the Eternal City’s eternal traffic jams, but also sparked unease about the U.S. leader’s fitness to lead.

“He doesn’t seem to be very intelligent,” said Nache Ezeiza, a 30-year-old clerk in a store near Rome’s Trevi Fountain. She said Trump reminded her of Berlusconi, whose legal and political woes finally forced him from office.

Germany, mindful of its past as the aggressor in two world wars of the last century, seemed more worried than most of its European neighbors about far-right movements and figures being emboldened by Trump. German media reports have had a strong anti-Trump undercurrent, culminating with a demand this week from the editor in chief of Germany’s leading weekly news magazine, Der Spiegel, for the U.S. president’s ouster.

In a signed editorial, editor Klaus Brinkbaeumer called Trump “a liar, a racist and a cheat” who had made a “laughingstock” of the United States. He added: “He must be removed from the White House before things get even worse.”

Political scientists in Germany cited the country’s Nazi past as inspiring revulsion over any indication of tyrannical behavior in leaders at home or abroad.

“Germans have had their own historical experience, and grow up on the lookout for even the slightest signs of a dictator, because we have this ‘nie wieder’ idea — ‘That can never be allowed to happen again,’” said Thorsten Hasche, a political scientist at Goettingen University.

Many ordinary Germans expressed angst over Trump, but some said it was too soon to pass judgment. “He’s said a lot of totally outrageous things — I was surprised Americans elected him,” said Hartmut Meyer, a 56-year-old truck mechanic in Berlin. “But at least he seems to be learning a bit as he goes on.”

In neighboring France, media commentary about Trump's presidency has generally been more restrained than in Germany, but outlets have followed in minute detail the succession of White House crises.

"The Trump presidency is in complete chaos," Le Monde, considered the country’s most cerebral newspaper, declared in a May 17 editorial. "The controversies are accumulating…. Every day that passes brings a new ‘affaire.’”

French author Marie-Cecile Naves, who has written a book about populism and Trump, said France’s own repudiation of far-right presidential candidate Marine Le Pen in this month’s election may have settled nerves somewhat. And the French public may see Trump’s struggles with Congress and the U.S. courts as a check on more extreme policy measures.

“The more time passes, the less afraid we become,” she said. “In general, we just don’t take him seriously.”

Whatever their sentiments, European leaders can almost certainly be counted upon to follow norms of diplomatic behavior in dealing with a visiting American head of state, analysts said.

“There are general concerns that Donald Trump as an individual is simply not suitable for the job, but there is also a recognition that he was legitimately elected president of the U.S.,” said Nicholas Dungan, a senior research fellow at the French Institute for International and Strategic Affairs.

In official circles, he said, “that will be the attitude … nothing other than the proper respect that the president of the United States deserves.”